Trey Anastasio Band comes to Radio City Music Hall on Sunday 3rd October 2021 for the second in a two-night-stand! Known for their larger-than-life shows, which are nothing short of spectacular, TAB bring lively and exhuberent energy to the stage with phenomenal musicianship, audience interaction, and plenty of surprises! Plus, an insane back-catalog that transcends genre and is nothing short of excellent music! Get ready for the party of a lifetime! 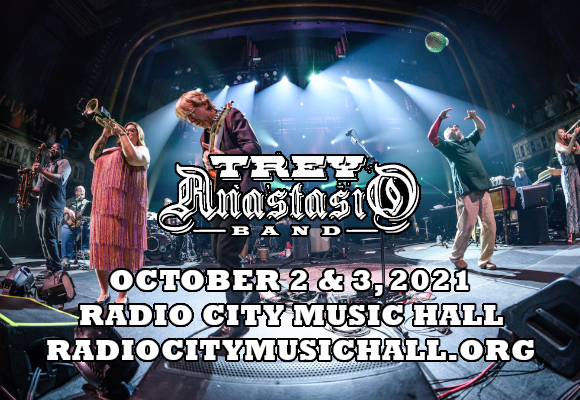 Fronted by award-winning American guitarist, singer, songwriter, composer, and lead vocalist of Phish, Trey Anastasio, the Trey Anastasio Band started in Vermont in 1998 under the name Eight Foot Fluorescent Tubes. Over the years, the band has gone under many names and has evolved from a trio comprising of Anastasio, Russ Lawton, and Tony Markellis to a ten-piece band with horns, saxophone, flute and more. Another side project of Anastasio’s – 70 Volt Parade – later became known as the Trey Anastasio Band. There have been several personnel changes across the years and the group’s current line-up consists of Trey Anastasio, Russ Lawton, Jennifer Hartswick, Ray Paczkowski, Cyro Baptista, Natalie Cressman, James Casey, and bassist Dezron Douglas, who joins the band in the wake of original member Tony Markellis’s recent passing.