Multi-Platinum rapper Russ is hitting the road in support of his sophomore studio album Shake The Snow Globe, grab your tickets and get to Radio City Music Hall on Wednesday, May 25th, 2022 (rescheduled from Tuesday 25th May 2021). What are you waiting for? This self-made artist has finally made it big, after years of literally giving music away, it's time to pony up and give him back for all the hard work he has put out. If you are after a show with good music, nice flow and no drama, then Russ is the guy for you. Peace. 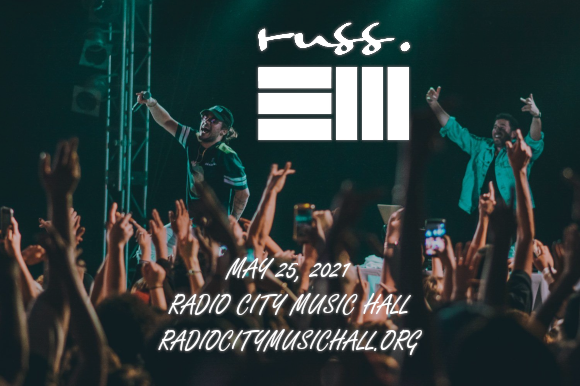 Russell James Vitale, a self-made multi-talent who started out giving his music away online, Russ is nothing if not a product of his times. The Atlanta-bred artist wrote, rapped, sang, and produced nearly a dozen free albums between 2011 and 2014, before inking a deal with Columbia Records. It’s a work ethic that not only earned him a loyal fan base, but also the freedom to explore his sound on his own terms.
Finally, Russ released his twelfth studio album, There's Really a Wolf, in May 2017, establishing him as a strong new voice in the mainstream, blending trap beats with atmospheric R&B and live instrumentation. The album was certified Platinum by April 2018. His thirteenth album, Zoo, was released in September 2018, and peaked at number 4 on the US Billboard 200, and His fourteenth studio album, Shake the Snow Globe, was released in January 2020, again peaking at number 4 on the US Billboard 200. The album features guest appearances from Benny the Butcher, Bia, Boogie, Bugus, Devin the Dude, Kiana Ledé, Rick Ross, and Ty Dolla Sign.