Britain's most popular comedian, Michael McIntyre, comes to Radio City Music Hall on Saturday 1st February 2020 for his second ever US show! The beloved, cheerful and charismatic comic, who was the highest-paid comedian in the world in 2012, will bring his lively, energetic and optimistic observational humor to the stage in New York as part of his Big World Tour, and he's guaranteed to have you laughing up a storm! Tickets available now! 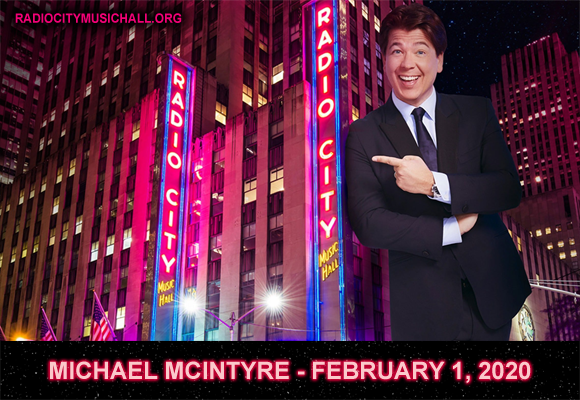 English comedian, writer, and television presenter Michael McIntyre is the UK's biggest comic. McIntyre's rise to fame began in the late-2000s, when he became a regular fixture on several British panel shows, including Mock the Week, 8 out of 10 Cats, Have I Got News for You, The Big Fat Quiz of the Year and Would I Lie To You?, among others. He also appeared on three episodes of Live at the Apollo in 2007, 2008 and 2009, which brought his work to a wider audience in the UK. To date, he has released four stand-up comedy DVD specials: Live & Laughing (2008), Hello Wembley! (2009), Showtime! (2012) and Happy & Glorious (2015). McIntyre began hosting Michael McIntyre's Comedy Roadshow in 2009 – a comedy series in a similar vein to Live at the Apollo that ran for two seasons. In 2011, he appeared as a judge on Britain's Got Talent for one season, and the following year, he was the highest-grossing stand-up comedian in the world. In 2014 McIntyre fronted his own BBC One talk programme, The Michael McIntyre Chat Show, and since 2016, he has hosted Michael McIntyre's Big Show: a BAFTA award-winning British variety and stand-up comedy television series. In 2018 he became the highest selling artist in the history of the O2 Arena, selling over 400,000 tickets over 28 shows.