Whether you're an EDM or a country music fan and anything and everything in between, there's a big chance y'all be meeting in the middle of Maren Morri's concert at the Radio City Music Hall on Friday 29th July 2022. This country-pop chanteuse is making her 'circles around this town', for a series of headliner shows in support of her new album "Humble Quest". With her versatility in blending genres of country, pop, R&B, and rock, she is always at her element onstage, delivering crowd-favorite hits such as "The Middle," "Hero," "My Church," "GIRL" and "The Bones", and many more. Catch Maren Morris as she wows the crowd at the prestigious Radio City Music Hall. Tickets are now on sale. Clicking that 'Get Tickets' sign on this site is you quick, easy, and safe way to book your tickets now! 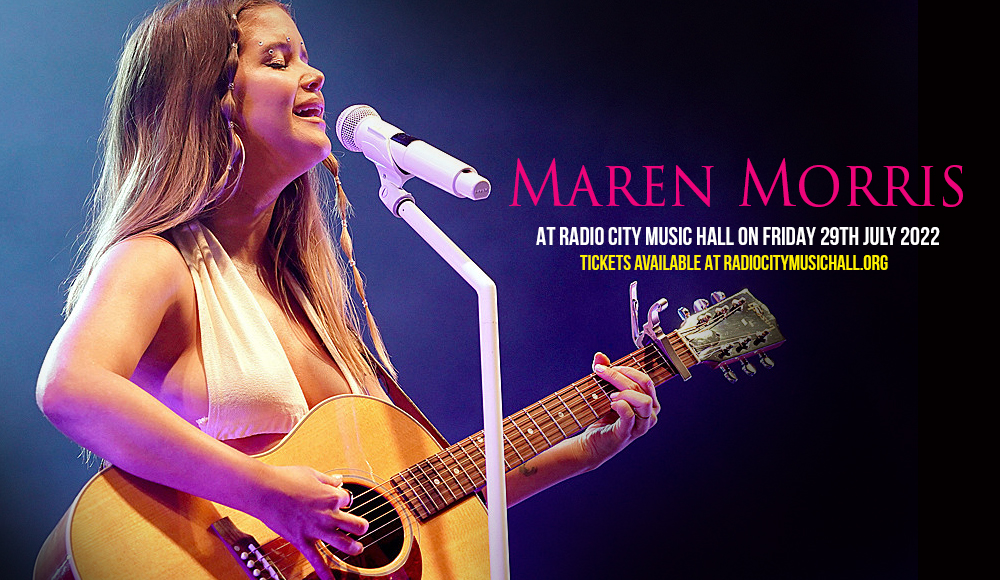 As an aspiring teen singer, Maren Morris auditioned for almost every series of television music competition programs, yet always came home with a 'no' or a 'next time' from the judges. Years later, those same TV shows have had several contestants render songs sung by Maren Morris! Indeed, Morri's success was written under the stars, no one, and nothing could stop her from shining. In 2016, Maren Morris broke through the charts with the single "My Church" becoming her first major hit single. It peaked at number five on the Billboard country songs chart, number five on the Billboard Country Airplay chart, and number three on the Canada Country chart. Then she later scored a Grammy win for Best Country Solo Performance for the song at the 60th Annual Grammy Awards.

"80's Mercedes", "I Could Use a Love Song" and "Rich", were succeeding singles that gained record sales and chart successes, plus a "Best New Artist" accolade from the Country Music Association. In 2018, EDM sensation Zedd, sought out Maren Morris and traveled to Nashville to record Morris's part for the song "The Middle". This single reached the Billboard Hot 100 top ten, peaking at number five. Taylor Weatherby of Billboard commented that the song "may have drawn the roadmap for a reliable new path to crossover success."

Morris has truly expanded and captured a global audience covering country, pop, dance, RnB – and everything in between, as she scored three number one songs on the Billboard Country Airplay chart and eight top ten songs on the Billboard Hot Country Songs chart. Morris has a collection of multiple prestigious recognitions including one Grammy Award, five Academy of Country Music Awards, one American Music award and five Country Music Association Awards.

This Maren Morris' "Humble Quest"–to fill the night with her multifaceted style of music and amazing showmanship. Don't miss it!