Get ready to take flight into stratospheric heights as Khruangbin is bound to amp up the Radio City Music Hall on Wednesday 10th March 2022. This trio from Houston Texas has taken elements and influences from various global sounds, converting curious audiences into a fierce and solid loyal fanbase. Hot on the heels of their 2020 album "Mordechai", the band pushes its listening pleasure even further with the release of the new album "Mordechai Remixes". “A good remix deconstructs, recontextualizes, or simply extends a good time,” says the band. Now have a great time seeing, hearing, and experiencing Khruangbin on the live concert stage. Don't miss this flight; book your tickets now! 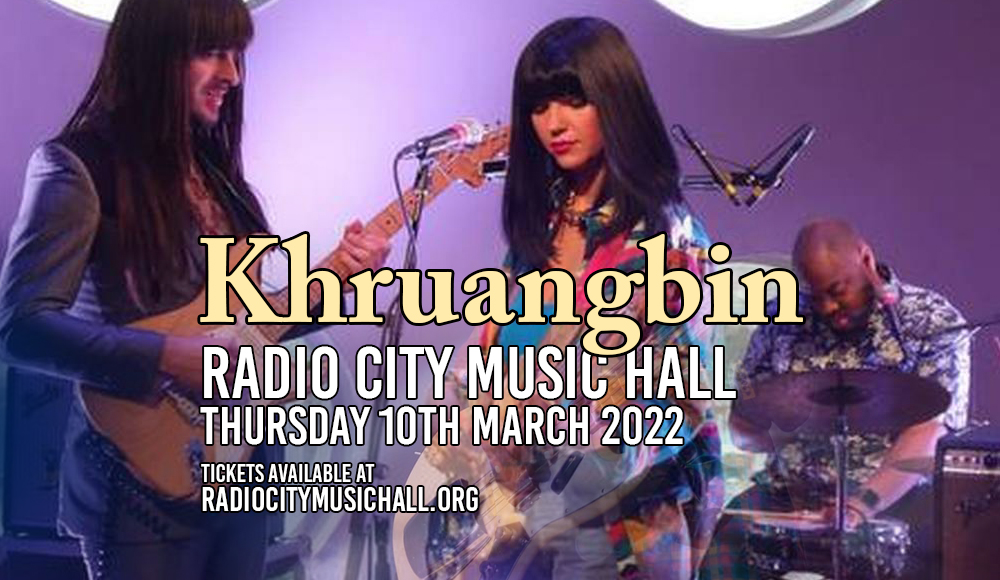 The band's name is the Thai word "khruangbin" (Thai: เครื่องบิน; RTGS: khrueang bin), which means "aeroplane", as their name. This American trio from Houston, Texas comprised of Laura Lee on bass, Mark Speer on guitar, and Donald Ray "DJ" Johnson Jr. on drums, have settled on the name Khruangbin as they set sights taking an international set of musical influences blending global soundscapes with classic soul, dub, rock and psychedelia.

They started exploring 60s Thai music history specifically from Luk thing, which resulted in their debut album "The Universe Smiles Upon You", released in 2015. In 2018, their sophomore album "Con Todo el Mundo" released 2018, delved into Spanish and Middle Eastern influences. In 2020, Khruangbin sought to cover more ground with their 2020 album "Mordechai."
Bassist Laura Lee said the band wanted the album to sound like "the world, rather than any one particular part of the world,” with influences from West African, Indian, Vietnamese, German, Czech, Mexican and many more cultures.

Music journalist Rob Shepherd of PostGenre, absolutely nails it as he says, "The [name Khruangbin], which translates to “flying engine” or airplane in Thai, is perfect for their music as it often crosses borders and cultures."

Book your flights and fly high with the sights and sounds of Khruangbin in concert. Get your tickets now!