Who is Jill Scott? That question was raised twenty years ago. American jazz/soul/R&B singer and actress, and spoken word artist, Jill Scott, answered back with a resounding RIAA-certified double-platinum album "Who Is Jill Scott? Words and Sounds Vol. 1", that peaked at No. 2 on the Billboard US R&B charts and No. 17 on the US charts, driven by the singles “Gettin’ in the Way,” “A Long Walk” and “The Way”. Two decades later, her legions of fans are no longer asking this question, but rather incessantly requesting that they relive that momentous and legendary album that has made a lasting imprint on them. Jill Scott replies with a "Who Is Jill Scott? the Tour" as the album marks its 20th this 2020. Save the date and lock-in those tickets! Catch Jill Scott at the Radio City Music Hall on Thursday 20th February 2020. Don't miss it! 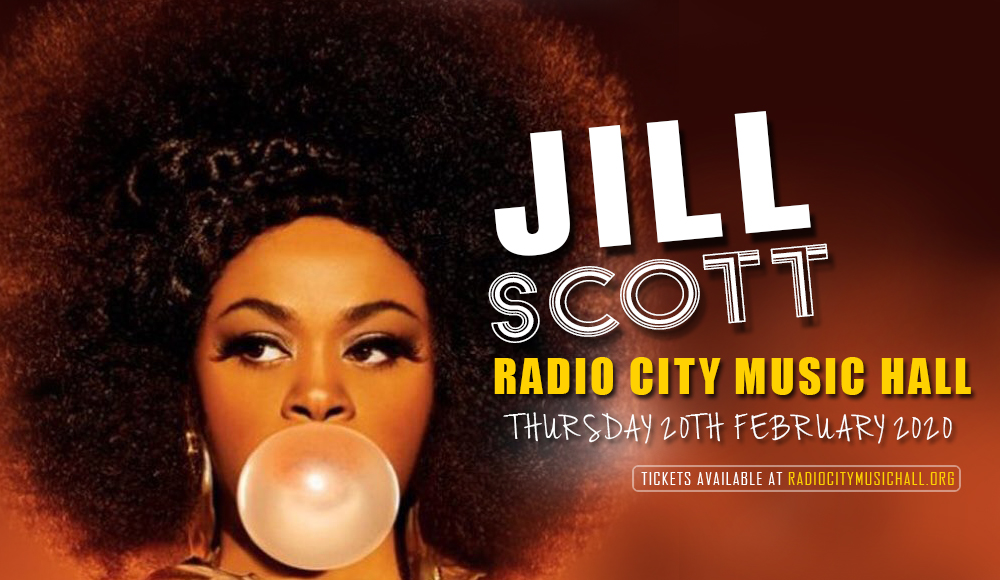 How can a 20-year old album still resonate not only to Jill Scott's most loyal fans, but also to a new generation of fans who may have never been born yet at that time? “It’s the honest stories and the timing. The album is sistah strong yet vulnerable and filled with love.”, says Jill Scott, who recently dropped the official announcement of the "Who Is Jill Scott? 20th Anniversary Tour".

"Who Is Jill Scott? Words and Sounds Vol. 1" is totally a far cry from the so-called beginners luck of a newbie artist. Jill Scott's multifarious talent as a soprano who infused jazz, opera, R&B, spoken word, and hip hop in a style, sometimes called neo soul, nailed for her a doubled platinum album and a Grammy Award. And she surpassed the sophomore jinx as well, with flying colors to boot. Scott's follow-ups, "Beautifully Human: Words and Sounds Vol. 2" (2004) and "The Real Thing: Words and Sounds Vol. 3" (2007) both achieved gold status; and tallyed her Grammy Achievements to five Grammy nominations for Best New Artist (2001), Best R&B Album (2001), and Best Female R&B Vocal Performance for three years in a row (2001-2003).

Not to mention, she was a darling of the press. Pop Matters, referring to Scott's vocal ability (1st soprano), stated, "Scott draws on her upper register, recalling the artistry of the late 'songbird' Minnie Riperton and Deniece Williams." Another article came out saying "The song evokes the artistry of Minnie Riperton as Scott sings in the upper register that makes its only appearances on 'Who is Jill Scott?' on the teasing 'I Think It's Better' and 'Show Me'."

So what can her ardent fans expect in a concert dedicated as a token of Scott's loving appreciation to her fans? Jill Scott beams with excitement, saying: "I’m going to be true to the album set list. I’ll do every song in the order of the album. My audience should bring their CD covers; some may know the list by heart. I will create musical arrangements for the songs purposed with new energy, but keep the integrity of the original songs they love. Expect theater. Expect incredible musicianship. Expect love."