The Tenderloins, aka the cast of Tru TV's hilarious and enduring hit comedy series Impractical Jokers, are bringing Impractical Jokers Live to Radio City Music Hall on Saturday 18th January 2020! The Cranjis McBasketball World Comedy Tour sees a whole host of hysterically funny hi-jinks from this madcap team, who are thrilled to be performing at Radio City:

"It's hard to make us speechless, but every time we perform at Radio City the crowd is unlike any other and we can never find the words to express how much the venue means to us," said The Tenderloins. "We couldn't be more pumped to return to Radio City in 2020 and know it will be an unforgettable moment." 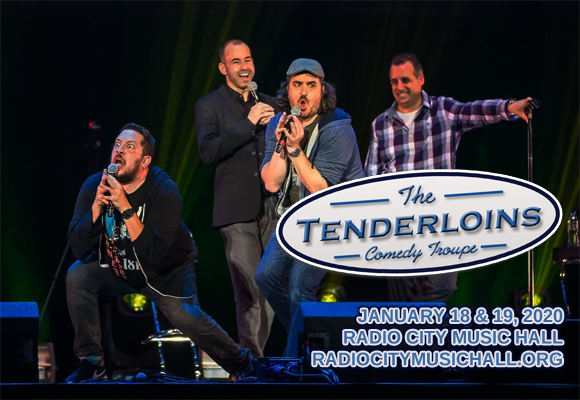 Best known for being the stars and creators of TruTV's popular television series Impractical Jokers, The Tenderloins are an American sketch and improv comedy troupe that formed in 1999. The group consists of comedians Joseph "Joe" Gatto, James "Murr" Murray, Brian "Q" Quinn, and Salvatore "Sal" Vulcano, and was started by Murray, Vulcano and Gatto, along with friends Mike Boccio and Gideon Horowitz, upon graduating high school together on Staten Island. Throughout the early-200s, the group made a name for themselves on the New York City comedy circuit, and in 2006, began posting videos of their comedy sketches on YouTube, MySpace, Metacafe, and other websites. A year after they began posting online, they won the NBC It’s Your Show competition with the sketch "Time Thugs", taking home a $100,000 grand prize. Not long after winning the competition, the group had a short-lived television deal with Spike TV. In 2011, they were picked up for a different television series with TruTV, which became the hidden camera practical joke series and worldwide hit Impractical Jokers.