English electro-synth pop duo Andy Bell and Vince Clarke, collectively known as Erasure will take us on an illuminating and sonic journey to experience 'The Neon' — a concert celebrating the release of their eighteenth studio album. The duo has been given more than just a little respect. Erasure is lauded and esteemed worldwide and is considered an 80s music icon. Erasure is still at the top of their game and continues to spread cheery and colorful vibes whenever and wherever they perform. Experience Erasure beaming with pride and joy as they trip the light fantastic and blast out the hits at the Radio City Music Hall on Thursday 20th January 2022. An amazing show you wouldn't want to miss, so book your tickets now! 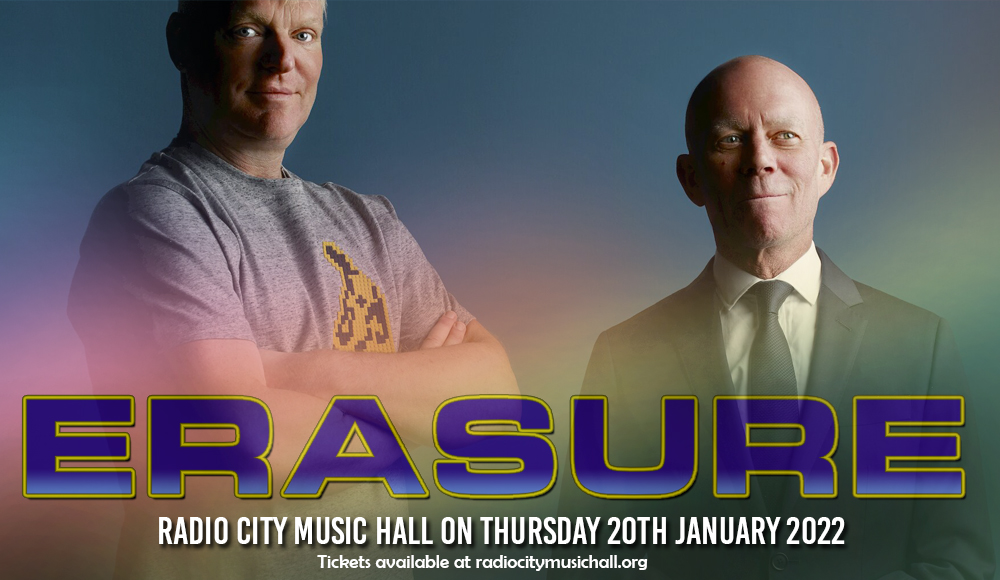 Songwriter and keyboardist Vince Clarke, previously known as a co-founder of the band Depeche Mode, got together with the flamboyant and charismatic singer and songwriter Andy Bell to form Erasure in London in 1985. The duo initially had a shaky start as their first three singles failed to register on the charts. However, with the release of their fourth single, "Sometimes", there was no turning back for the duo who had, since then, spawned more than 200 songs between 17 studio albums, five live albums, eight compilation albums, 13 video albums, seven Extended Plays, 41 singles, and two tribute albums. To date, Erasure has sold more than 28 million albums, and still counting as they have just unleashed their eighteenth studio album in 2021 entitled "The Neon".

Erasure's fun and high-spirited energy are best enjoyed live, so the duo hasn't rested on their laurels, so to speak. They still tour the world and are in fact due for a much-awaited performance at the Radio City Music Hall on Thursday 20th January 2022.

Andy Bell says, “We’re so excited to be able to – at last – announce dates for The Neon Tour! We’d hoped to have seen you sooner, but can’t wait to see you all in 2021. Until then, keep safe!”

For safe and quick way to book tickets, just click on the 'Get Tickets' link on this page. Don't wait 'til the last minute, buy your tickets now!