It's a polaroid love! Straight out of the polaroid and onto the live stage, ENHYPHEN is coming right your way across cities around the globe at the MANIFESTO Tour, in support of their newest mini album 'MANIFESTO: DAY 1'. ENGENEs can witness the superstars throw their signature dazzling live performances in-person at the MANIFESTO Tour which stops by at Radio City Music Hall on Saturday, October 15th, 2022. Their new record features their newest hit bop "Future Perfect (Pass the MIC)". So, get your groove and those lightsticks ready as the crowd hypes the boys all out at the MANIFESTO Tour! Book your tickets now! 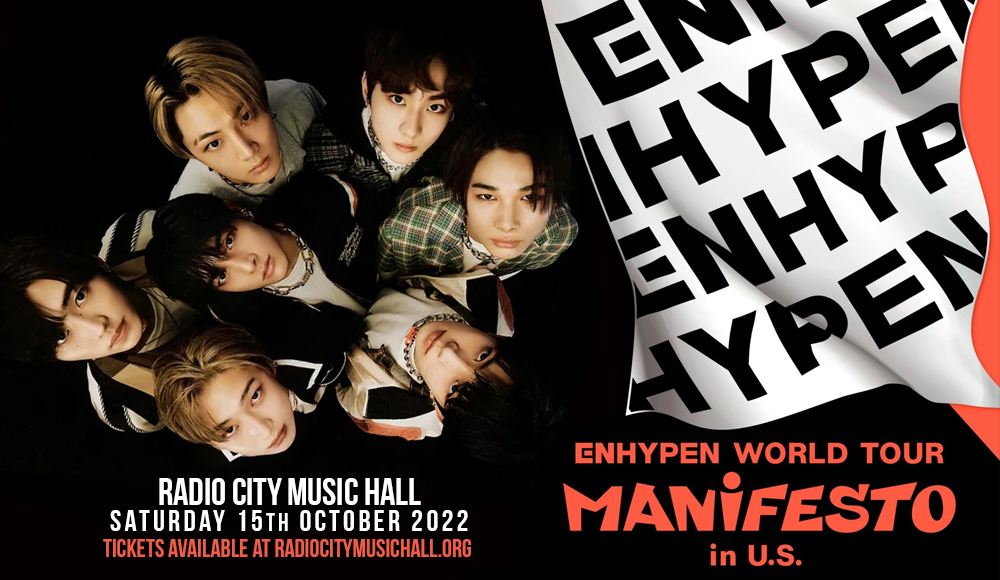 With the release of their third mini album 'Manifesto: Day 1', the South Korean global sensation ENHYPEN is set to skyrocket this big new era with their first-ever world tour. The MANIFESTO tour begins with a two-night show in their home base in Seoul, then flying over to the US, concluding the US trek at Radio City Music Hall in NY on October 15th.

ENHYPEN stars Heeseung, Jay, Jake, Sunghoon, Sunoo, Jungwon, and Ni-ki are all pumped up to meet their fans around the world up aboard their first world tour. With 2022 marking the return of live music to concert venues globally, Ni-Ki- shares that the tour "feels new and exciting to think about" as they finally get to perform for their fans in person. Jay shared that being able to travel back to the United States is what he's most excited about.

US fans are definitely excited to finally meet these boys who melted their hearts through their breathtaking bops and hits such as "Given-Taken", "Drunk-Dazed", "Polaroid Love", and their newest ear-catching bop "Future Perfect (Pass the MIC)".

ENHYPEN's debut full-length studio album 'Dimension: Dilemma' and its 2022 repackaged version 'Dimension: Answer' both hit #1 in South Korea, Japan, and US World charts. The record also hit #11 and #13 respectively on the Billboard 200.

The boys also have three mini-albums, the newest being 'Manifesto: Day 1' which marks a big new era for the beloved stars. About the new record, "It's about our own desire to live our life without being swayed by the world," Jungwon shared in a press conference.

With their new lead track "Future Perfect (Pass the MIC)" off of the new record out in the airwaves, "… the song is about how our connection will go further in the promised future so that's why it's called 'Future Perfect'," shared Jungwon.

With a bright future ahead, the superstars are set to give it their all, now that they can prove to the world their skills and talents live on stage, right in front of their beloved fans. Don't miss out on ENHYPEN's first-ever world tour by booking your tickets now!