Clairo's music stardom was borne out of the internet fandom with her viral music hit single "Pretty Girl" in 2017. With a brand new album "Sling" unleashed in 2021 that debuted at the top 20 of the US Billboard 200, Clairo is figuratively and literally going places. Fans are now gearing up for her upcoming tour as she officially announced her North American headlining tour dates. Clairo, Arlo Parks & Widowspeak are slated to perform at the Radio City Music Hall on Thursday 24th February 2022. Fans are quickly grabbing tickets left and right. Make it fast and easy by just click on the 'Get Tickets' link on this page. Don't wait 'til the last minute, book your tickets now! 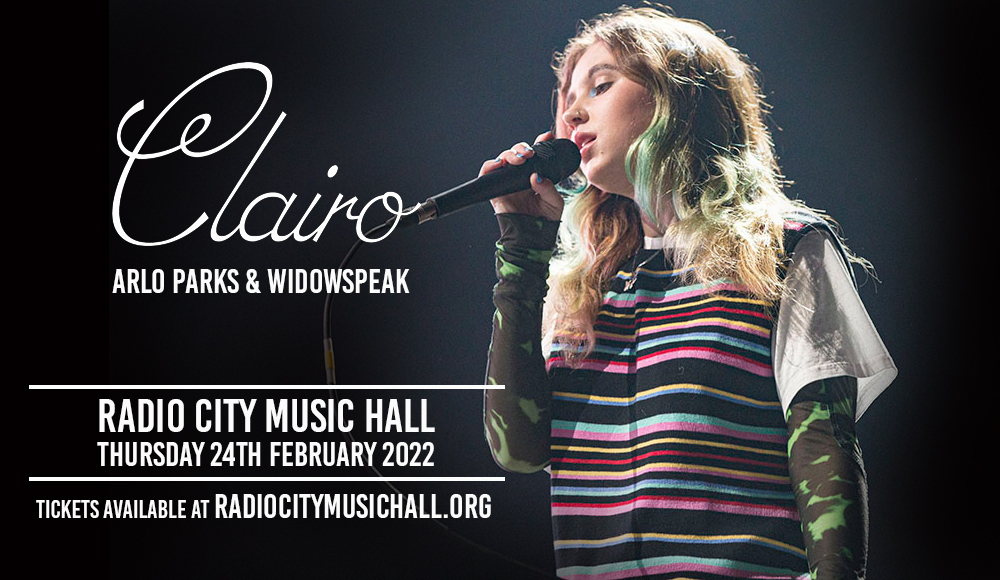 Clairo may have been born with a platinum marketing spoon in her mouth, being the daughter of marketing mogul Geoff Cottrill, yet Clairo is proving to the world that her brand essence truly comes from her brilliant songwriting talent and compelling music artistry. The viral success of the music video for her lo-fi single "Pretty Girl" in 2017 has amassed more than 15 million views on YouTube by 2018, and still steadily growing by the numbers to date. Due to this success, Clairo has been pursued by a number of major record labels. She ultimately signed under Fader Label, with her debut album "Diary 001", released in 2018 featured "Pretty Girl," "Flaming Hot Cheetos" and "How." Then her debut studio album "Immunity" was released the following year to critical acclaim as she unleashed the singles "Bags" and "Sofia", with the latter charting on the Billboard Hot 100.

As Clairo say that her songs were created in her dorm bedroom — parallel to the more recent genre called 'bedroom pop'. Yet Clairo broke such perception that she could get out there, get her share of a huge draw of audiences and playing live on her headlining tour throughout North America, opening for Dua Lipa, a sell-out July performance at the Bowery Ballroom in New York, and mounting major festival stages like the Lollapalooza (2018) and Coachella in 2019.

As Clairo mounts the concert stage, she wants her crowd to feel safe and have fun. “Now that shows are starting to come back into our everyday lives, it’s important to prioritize everyone’s experience to the fullest.” Clairo shared “Everyone deserves a resource and everyone deserves to enjoy the show in peace. I want the audience to know that there is someone who will listen and believe them at every show”.