One of the biggest artists of her generation, Alicia Keys is a true star, whose musical talent has seen her win 15 Grammy Awards and sell over 65 million albums worldwide! The global icon is touring this year for the first time since 2013, and she'll be performing a very special hometown show at Radio City Music Hall on Friday 14th August 2020! At what will be a landmark show, the R&B star will perform songs from Alicia, her most recent album, plus a selection of the chart-topping songs that made her famous! A treat for the eyes, ears and soul, this show will give you everything you want from an Alicia Keys concert and more! 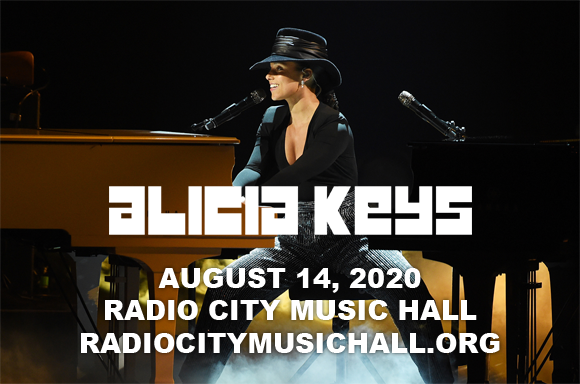 American musician, singer and composer Alicia Keys was recognized early for her talent – signing to her first record label when she was just 14 years old. Her debut album, Songs in A Minor, was a worldwide hit both critically and commercially – it earned her five Grammy Awards in 2002 (including Song of the Year and Best New Artist), was certified six-times platinum by the RIAA, and produced her first Billboard Hot 100 number-one single, "Fallin'". Her follow-up, The Diary of Alicia Keys (2003), was also a four-time Grammy Award-winning success, launching the hit singles "You Don't Know My Name", "If I Ain't Got You", and "Diary", and selling over eight million copies. Keys' career has continued to go from strength to strength, with 15 Grammy Award wins in total, and six number one albums rated platinum or higher. In addition to her Grammys, Keys hgas also been awarded 17 NAACP Image Awards, 12 ASCAP Awards, and an award from the Songwriters Hall of Fame and National Music Publishers Association. 2020 brings the release of ALICIA, her seventh studio album.