Are you game to take a cruise back in time via the 80s time machine? Well, buckle up for a trip to the famous Radio City Music Hall on Tuesday 12th April 2022 as Synth-pop sensation a-ha takes the stage to take you back on a fantastic 90s music voyage. The band is touring in 2022 for their 40th anniversary, and this one-night-only engagement is your chance to rock your seats with the hits that brought them stellar standing, namely "Take On Me", "The Sun Always Shines On TV", "Hunting High and Low", "The Living Daylights", "Stay on These Roads", and "Crying in the Rain"." Don't miss this A-ha moment! Save the date, lock in your seats by booking your tickets right here, right now! 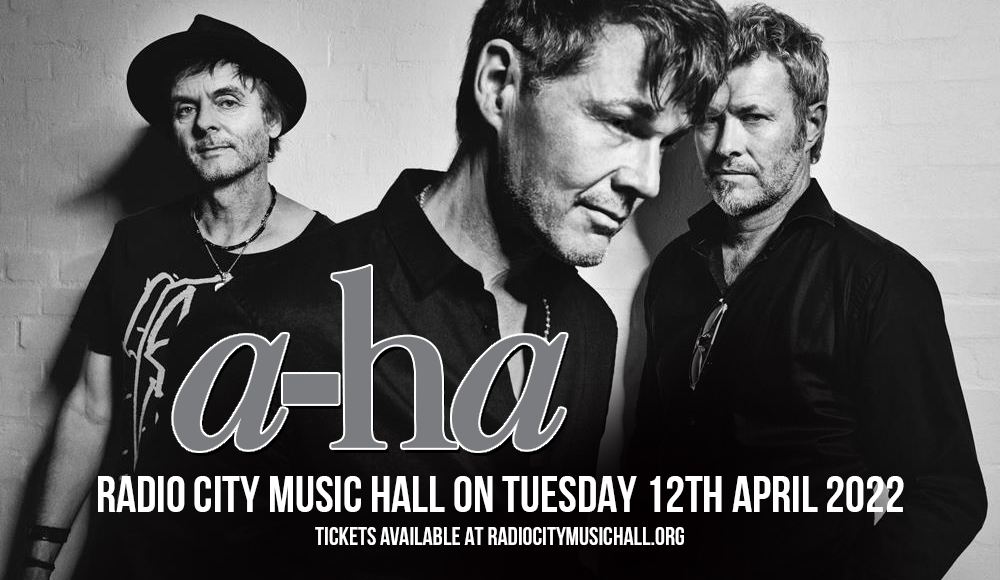 a-ha's illustrious career can be summed up in two eventful cycles: making records and breaking records. This Norwegian synth-pop band formed in Oslo in 1982, is one of the pillar and smashing acts of the 80s.

A-ha's biggest and most successful release was their debut album "Hunting High and Low" in 1985. Their back-to-back smash singles"Take On Me" and "The Sun Always Shines on T.V." rocket launched them in major music charts worldwide, peaking at number one in their native country Norway, number 2 in the UK, and number 15 on the US Billboard album chart. The chart and commercial success of the album, as well as the increasing popularity of the band, earned them a Grammy Award nomination for Best New Artist. In the UK, Hunting High and Low continued its chart success into the following year, becoming one of the best-selling albums of 1986.

Aside from its massive airplay and fan popularity, "Take On Me's" music video was a phenomenal and innovative masterpiece, as it used a pencil-sketch animation/live-action combination called rotoscoping. It is still regarded as one of the most amazingly recognizable videos of all time. The music video was nominated for eight awards at the third annual MTV Video Awards in 1986, winning six, including Best New Artist in a Video, Best Concept Video, Best Direction, Best Special Effects, and Viewer's Choice and Best Video of the Year. Their six MTV Award wins for that video gave them twice as many wins as Michael Jackson's "Thriller" and more than any artist in the three years of the awards combined.

A-ha also added another feather to their caps as they recorded the title-track theme song to the James Bond film "The Living Daylights." The band is also included in the Guinness Book of World Records for having the biggest-paying rock concert attendance, drawing an audience of at least 198,000 at the Maracanã Stadium during the Rock in Rio festival. A-ha has sold more than 100 million units of albums and singles combined with their discography of ten studio albums, several compilations and four live albums.

A one-night-only gig at none other than the Radio City Music Hall by one of the most sensational Synth-pop bands in the world is one of the best moments to look forward to in 2022. Don't miss this a-ha moment!